Archived Protip for my LOD:

There is a difference between acting like a boss and being a leader. You can be the "acting" STL all you want, but you will never have the respect of your store if you don't start working along side us. It's great that you have time to be on Instagram from your phone while on the floor barking orders over the walkie to go up for backup while the rest of the team figures out exactly who is going to materialize out of nowhere to do that because literally everyone is either already on a lane, or helping a guest. And way to "demonstrate courage" today by yelling at me for something that you told me to do. Please keep developing though, because we will all celebrate the day you get transferred and are no longer our problem!

"Be like water making its way through cracks. Do not be assertive, but adjust to the object, and you shall find a way round or through it. If nothing within you stays rigid, outward things will disclose themselves.

Poenomial said:
"Be like water making its way through cracks. Do not be assertive, but adjust to the object, and you shall find a way round or through it. If nothing within you stays rigid, outward things will disclose themselves.

That's funny, a guy I used to work with would tell me that all the time! It never made sense to me, but it at least made me chuckle long enough to forget how annoying my job can be.

The thing about water is that it can trickle gently or pound in torrents; it can be stationary or be set into motion with the slightest breeze; it gives life to plants/animals/people but it can also take life through drowning.
Be like water, indeed.
C 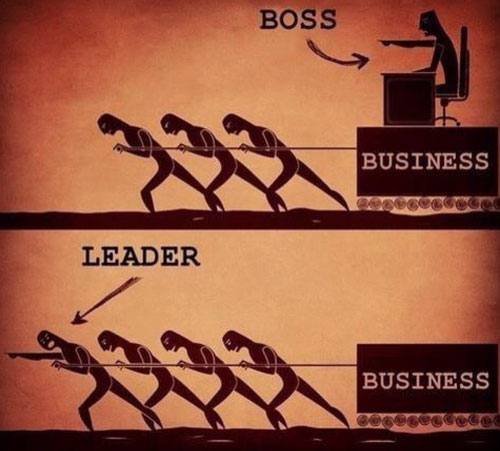 "A boss likes to tell, while the leader prefers to teach

If you have ever worked for a boss, you were miserable because you were told what to do and not given any room to flourish. A leader understands that the people around him must be creative and think on their own, so he teaches them to do so and builds them up to make them feel like they are special and in charge.  A boss likes being on a pedestal, above the fray, while the leader likes to be among those they lead.

Bosses love to have their own office with a closed door, away from everyone else, it empowers them and makes them feel like they are better than the others. Leaders are inside the pit, they go where their army goes and are there to fight right alongside them.

A boss gets lost in the details, while the leader keeps the big picture

Bosses are the guys who love to waste time talking and not doing. They love talking about a problem and its details rather than figuring out solutions. Leaders always keep the big picture and the goal in mind. They never make a move unless it benefits the primary goal.

A boss rules by fear, while the leader inspires with trust

Bosses think it is smart to make others fear them, so that they can work harder for them when, in reality, it is the other way around. When you rule by fear, the people are miserable and hate working there. Fear inspires nothing and makes employees second-guess themselves. Leaders inspire with trust, they place their trust in those around them and allow them to make decisions on their own, which makes sense because they are confident about them.

Bosses are extroverts; they like to be the center of attention, take all the credit and be arrogant because it makes them feel superior to others. Leaders show quiet humility, they move in silence and their only goal is to get the job done, not be the poster boy.

A boss likes to talk, while the leader prefers to listen

Bosses feel like it’s either their way or no way. They are stubborn and they want to do most of the talking. Leaders listen because they know what other people are saying and are thinking is invaluable in order to improve and evolve their own ideas.

A boss wants to dictate, while the leader would rather collaborate

A boss looks at himself at the leader of the pack, they are the dictators and the ones that hand off tasks and just check in on them. Leaders collaborate on tasks rather than just giving them out. They want to help make the process easier and to teach along the way because there is more value in teaching someone.

A boss outlines the “what,” while the leader also always explains the “why”

It’s not what you do; it’s why you do it. Bosses rule people who are just there for the check, what they do is their job and they clock in and they clock out. Leaders explain why they do something and get those around them to believe in the why, in the vision. He makes them want to help the leader excel as much as possible, because they trust him and believe in him.

Bosses are selfish; they will only care about company profit and the money that goes into their own pocket. A leader cares about making those around him happy because without his team he would be nowhere. So he makes sure he does everything in his power to keep them happy and motivated to give it all they’ve got.

A boss is a disabler, while the leader is an enabler

A boss will put you down when you’ve done something wrong. He will tell you that it is your problem and that you have to go figure it out. A leader will enable you with a solution and help you get there rather than bringing you down and making you feel weak.

A boss criticizes, while the leader coaches

A boss will find something wrong with everything; they are never happy because they feel that no one can accomplish something that is perfect aside from them. They will criticize everything and anything. A leader coaches, he will point out the stronger points first and will build on them to help balance the weaker ones.

A boss manages to an end, while the leader serves for a purpose

A boss’ end is money, nothing more and nothing less. It’s simply all they care about and it’s all they are driven by. A leader is driven by a purpose beyond the money, it’s a greater cause and that is what inspires those around him.

A boss demotivates with impassiveness; while a leader inspires with care and empathy,  a boss doesn’t care about those around him, they are all replaceable and anything that is going on in their lives doesn’t concern him. A leader inspires by caring and being there for those who are there for them.

These are the key differences between a boss and a leader. If you are currently in the workforce, position yourself under a leader and not a boss. If you are miserable at work, then you work for a boss. If you enjoy what you do and it doesn’t even feel like work, you are in the presence of a leader. You need to mold yourself into a leader and understand that leaders are the pioneers of this world, not the bosses."

I pasted the text for I found the giant pictures in the original article completely pointless
and overwhelmingly annoying.
Last edited: May 22, 2013

Poenomial said:
"Be like water making its way through cracks. Do not be assertive, but adjust to the object, and you shall find a way round or through it. If nothing within you stays rigid, outward things will disclose themselves.

I couldn't help but read that like Bruce Lee. I need to find that interview on Youtube.. lol

Poenomial said:
"Be like water making its way through cracks. Do not be assertive, but adjust to the object, and you shall find a way round or through it. If nothing within you stays rigid, outward things will disclose themselves.
Empty your mind, be formless. Shapeless, like water. If you put water into a cup, it becomes the cup. You put water into a bottle and it becomes the bottle. You put it in a teapot it becomes the teapot. Now, water can flow or it can crash. Be water, my friend." -Bruce Lee
Click to expand...